- February 23, 2006
I don't think Kenji is doing too good. Well, let me take that back... I *know* he's not doing good. He's been lying around the last few days acting like the hero in an Indian movie doing a long death scene. The only difference is he isn't singing in some field full of wild flowers. LOL.

If you haven't seen an indian movie, allow me to explain...

They tend to have very long, drawn-out death scenes, where the hero, despite bleeding almost to the brink of death, has the strength, stamina, determination, and vitality to crawl across rivers and valleys, over mountains and hilltops to see his love one last time. Now, during this arduous journey, he imagines running with her in a vast green field or climbing up trees, and singing 10-minute long songs.

We have this rosy barb that is SUCH a bully. He chases the other one around mercilessly, and I'm afraid the little guy is going to have a heart attack and keel over and die. We bought 2 more rosy barbs tonight, in hopes that having them in a school would stop the first one being aggressive. So far... it's not working too well as he now has THREE others to chase around. I think I'm going to have to resort to buying a breeding tank, and putting him in there for time out! 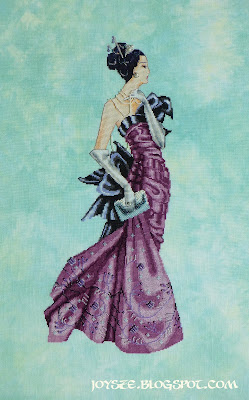 ... Lady Alexandra!! (or as I loving call her Rady Arex. AHAHAHAHAHA!!!)The last stitch went in at about 4pm EST yesterday and I am so pleased with how she turned out! :D


The Particulars:
Lady Alexandra by Mirabilia
Color conversion by Vanessa M.
Facial rechart by Heidi B. Fabric: Merfolk's Morn, 32ct hand-dyed  belfast by SMF
(Gifted by Brenda D.) Stitched 2 over 2 Floss: DMC, Kreinik Beads: Mill Hill, Pearls Started: December 7th, 2012 Finished: March 29th, 2013
I changed her earrings, ring, and tiara to pearls to match her necklace. I, for one, would never be dressed to the nines and have non-matching jewelry. ;) The chopsticks in her hair are stitched with kreinik.


The beads on the 'tendrils' of her dress were changed from the original blue to a light lilac.

Apart from the above changes, all the beads were as charted. I love how the purples of the beads and floss blend and compliment each other so perfectly. I'm such a tone-on-tone girl. :) 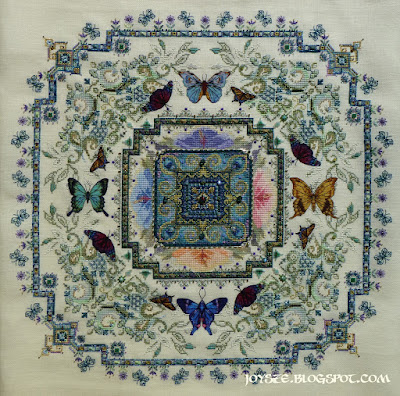 It is finished and I MADE THE DEADLINE!!! Whoooot whooooooot!!! :D Thanks everyone, for cheering me on the last 6 weeks. :D

Martina has designed yet another spectacular masterpiece and I think I'm going to tell my mom that she can't open this till I'm on video chat with her, HAHAHA!!

The over 1 butterflies are so life like and this baby blings like nobody's business... but, enough talk. I'll let the pictures speak for themselves. :D 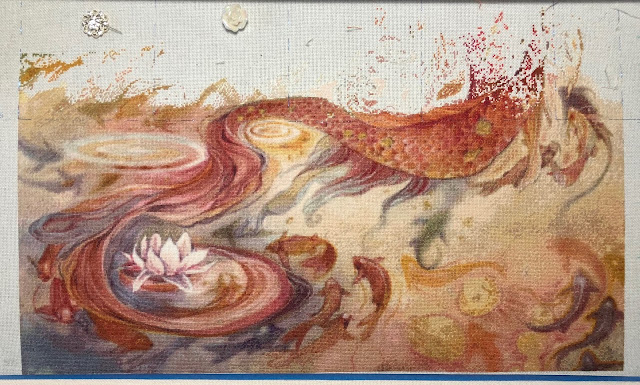 This is both a good and bad day with Yexian's progress...


The good: I'm at the happy juncture of 35ish% done and it's time to scroll up!!!! HUZZAH!!!!
The bad: Scrolling up leaves me with a huge expanse of (mostly) empty material and damn if my mojo doesn't look at that and want to pull the blanket over its head and go into hiding. LOL!

I'm hoping said mojo will cooperate and ride the high of finishing a section and overlook the empty spaces. HAHA! We shall see. The objective is still to try and get it done by year's end. Possible? I don't know. I've calculated that I need to do about 680 stitches a day to accomplish this and those 35-stitches days ain't helpin'... hahah!! ALTHOUGH... I have Friday off for Good Friday and the current plan is to stay in PJs and stitch for the bulk of the day. I *should* do ironing too though... it's up to almost 5 weeks worth of clothes now. *gasp*
Read more